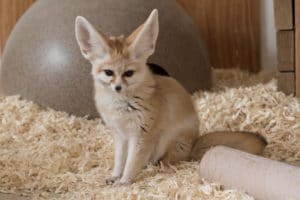 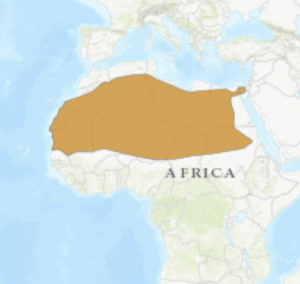 The fennec fox’s range encompasses much of the Sahara desert, from the Atlas Mountains in northern Algeria and Morrocco to the semi-desert regions of southern Mauritania, from the Atlantic Ocean to the western edge of the Nile River in Egypt and Sudan. There are currently no range-wide threats to the fennec fox, though there is increased human activity in the Sahara which has the potential to become a disturbance to the fennec fox.

As a specialist, the fennec fox has a very narrow range of ecological tolerance. It subsists in arid, desert regions and the vast sand seas of the Sahara, including the sparsely vegetated dunes near the Atlantic coast in eastern Mauritania. Typical annual rainfall in the fennec fox’s range is between 100 to 300 mm, about 4 to 12 inches per year.

Although widely and commonly observed throughout its range, relatively little is known about the social or behavioral characteristics of the fennec fox in the wild. A 2009 field study lead by the Saint Louis Zoo in the United States was the first of its kind focused on three species of the genus Vulpes and was joined by the IUCN Canid Specialist Group, University of Oxford WildCRU, and the Sahara Conservation Fund. Another study in 2015 in Morocco should contribute to data on population movement and habitat use, however there is still little knowledge about the species outside of captivity.

Fennec foxes are omnivores and prey on rodents, insects, birds, and eggs in addition to vegetation. 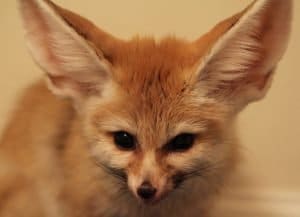