About Us – Animal Park at Conservators Center
About Us

The Animal Park at the Conservators Center 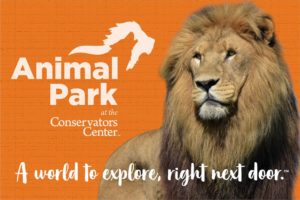 The Animal Park at the Conservators Center was founded in 1999 in Mebane, NC. After volunteering and working for other wildlife oriented organizations, Douglas Evans and Mindy Stinner founded the Animal Park as an educational non-profit dedicated to providing a specialized home for select carnivore species. In 2001 the Animal Park relocated onto 45 acres of beautiful, forested land in Caswell County, of which only approximately 10 acres is currently developed. Over the next few years, the site grew to house three tigers and about 25 small wild cats and other small carnivores.

In 2004, the Animal Park at the Conservators Center assisted the United States Department of Agriculture by accepting the placement of 14 lions and tigers that were part of a larger confiscation of animals living in unacceptable conditions. These animals were coming from a facility that focused on reproduction, and four of the female large cats delivered cubs not long after their arrival. The Animal Park’s population of large cats expanded from three big cats to over 30 individuals in a matter of a few months.

Because of the decision to maintain these animals on site, the business plan of the organization was shifted to include opening the park to the public to provide enough funding to support the expanded population. With that shift, the Animal Park opened its doors to the public in 2007 with its first guided, walking tours.

Today, the Animal Park is home to over 70 animals, and more than 21 species; employs more than a dozen full and part-time individuals; and is a hub of volunteer activity. The Park welcomes over 16,000† visitors each year from all over the state and across the country. In addition, the Animal Park participates in collaborative educational efforts with other institutions that expand the educational impact far beyond the park’s borders.

At the core of the Animal Park's mission to reconnect people with wildlife is a commitment to educating the public about the species in our care. We firmly believe that people are more likely to protect the wildlife and the environment that they know and love after making a personal connection with an animal. To that end, we strive each day to share the stories of each of our residents and facts about the species they represent with the public through our tours, field trips, events, and collaborative partnerships.

Our tour guides are always incorporating the latest facts, information, and trends into our tours and obtain relevant information from trusted sources like the IUCN and respected leaders in animal husbandry, conservation biology, ecology, and zoology. We participate in many science and educational events throughout the year, including North Carolina's Science Festival, and are always on the lookout for ways to reach a broader audience.

We host thousands of children on field trips annually, working with teachers and home-schooling parents to complement their students’ curricula with a transformative personalized tour experience. When combined with the impact of our on site events like Girl Scout Day, and the broad reach of the educational programs we provide in partnership with the Museum of Natural Sciences in Raleigh, we make a significant impact on young people in the Triangle, Triad and beyond.

The Animal Park also offers a competitive internship program that provides meaningful experiences for college students and postgraduates from the US and abroad who are interested in learning to care for exotic and native species. During their internship, students are exposed to many aspects of running a nonprofit like the Animal Park. Many of our interns go on to veterinary school, graduate school, and to work in field research positions or at other wildlife facilities and zoos.

Our close relationship with select institutions of higher learning helps create an opportunity for us to connect with potential interns or employees, and provides the Animal Park additional opportunities for outreach. Of special note is the broad relationship with Elon University which encompasses guest speaking, park tours for classes including biology and philosophy, collaborative marketing research, multimedia production, publication of books for sale in the Animal Parkr’s gift shop, and an ongoing relationship with the illustrious Elon Academy.

Behind the scenes, the Animal Park has developed a strong, collaborative educational relationship with the North Carolina State University College of Veterinary Medicine (CVM). This unique partnership provides periodic experiential learning opportunities for veterinary students and faculty. We have been happy to collaborate with the CVM to allow their students in relevant disciplines to work with our animals.

It takes a surprising variety of skills, talents, and specialties to care for the animals in residence at the Animal Park. Our staff works daily with our animals to ensure they remain as tractable as possible, using training and handling skills to acclimate them to human touch and minor veterinary procedures, such as standing on a scale to be weighed or accepting an injection.

Our veterinarians and veterinary technicians assist us daily in providing high-quality healthcare for each of our residents. The Animal Park’s primary veterinarian is also a Board member, and has been with the Animal Park as a volunteer since 2001. In addition, the Animal Park works with a skilled surgeon and referral hospital with 24-hour coverage, plus specialists who provide care for certain species.

In addition to collaborating with The North Carolina State University College of Veterinary Medicine (CVM) regarding educational opportunities for student participation, the Animal Park is proud of its collaboration with the College's Carnivore Team and Necropsy Team, which offers unparalleled learning and research opportunities for CVM students and faculty.

The Animal Park is an active participant in the larger zoological community. Our staff members maintain memberships in several leading industry organizations, often recognized as professional members, serving on committees or the Board, writing articles, speaking or teaching, and assisting with their programs and development. Staff members participate in professional conferences, workshops, and other educational opportunities to keep their skills up to date and remain connected across our larger sphere of influence.

Our leadership participates in or contributes to legislative and regulatory study groups and other collaborative efforts such as enhanced contingency planning for zoos. Importantly, our leadership serves as a resource for local, regional, and national regulatory and legislative officials, providing information and feedback on proposed changes to ensure we are all working collaboratively to enhance public safety and animal welfare through appropriate regulatory oversight. Our local officials, state representatives, and neighbors are supportive of our presence, and we work to sustain those relationships for the betterment of the community and of our mission.