How Do You Spay a Tiger? (And Other Veterinary Questions Answered!) – Animal Park at Conservators Center

How Do You Spay a Tiger?

As anyone with a pet knows, taking an animal to the vet can be DRAMA. One of my house cats has such a panic attack at the site of a transport kennel that I leave it out in the house for days at a time beforehand, in hopes of reminding him it’s not evil. The dog we adopted many years ago would be fine until she realized we were at the vet’s office, when she would suddenly forget how to use her legs.

Now imagine what a veterinary visit is like with a tiger, caracal, or binturong! Fortunately, our vets often make house calls to the Park for vaccinations and minor procedures. And when needed, we have systems in place to get our residents to the doctor’s office.

A few weeks ago, Kaia Tiger had a special appointment. After careful evaluation of how much she and her brothers still enjoy being together, and how grown up they’re getting, we decided the best choice was to spay her so they could remain together as long as possible. With weeks of planning by Dr. Doug Ray from the Animal Hospital of Mebane, his vet techs, our husbandry manager, Jessica, and our operations team led by Nick, we put everything in place. 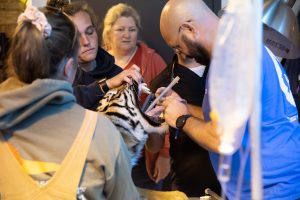 While she was focused elsewhere, with her side pressed against the wall of a transport crate, Kaia’s surgical team was able to immobilize her with a quick injection. She went down smoothly and was quickly set up on the exam table.

Then it was time for the full anesthesia gas hookup. First, Kaia was intubated to ensure that her airway was protected during the procedure, that she inhaled the correct amount of anesthesia, and that in case there would be any issue with her breathing, Dr. Doug would have as much control over it as possible. Tigers—even ones that aren’t fully grown—take some extra expertise to intubate. They are larger than a dog, but not as big as a horse, so all the equipment must be adjusted for their size. It’s not easy for a vet to see down into a tiger’s throat, but they can lift the trachea from the outside with a hand on the animal’s neck, which helps them guide the tube into the right position. Once Kaia was intubated, the team placed her on her back for the rest of the preparation. 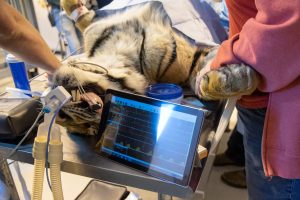 Kaia is closely monitored throughout her surgery.

By this time Kaia had monitors going, including a readout of her heart rate, breathing patterns, and oxygen saturation. “Normal” for a cat or dog is not “normal” for a tiger, so expectations have to be adjusted. Dr. Doug completed a quick exam of Kaia’s body, from head to tail tip. Her adult teeth had all come in on schedule, looking almost oversized in her young adult face. Her foot pads and claws were in good shape, though even if we didn’t already know it, we could’ve gathered that she’s an active cat from her muscle tone and the normal wear on her hind nails.

Then Kaia’s belly had to be shaved. It’s always amazing to watch the fur come away from tiger skin and see the stripes remain. The spay procedure itself didn’t take long, and the team collected samples of blood and urine for testing as additional confirmation that she’s in excellent health. During procedures like this, an extra vial of blood is collected, when possible, for genetic research purposes (we work with Texas A&M and NCSU), and Kaia was able to contribute. Her test results came back the next day and looked spot on (stripe on?) for a tiger. 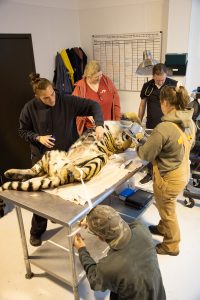 Kaia’s belly is shaved to prepare for her procedure (note the stripes on her skin!).

After Kaia was secure back in the transport crate, Dr. Doug reversed some of the medication and was soon able to remove the breathing tube. Within a few minutes, Kaia was groggy but awake and responding to the voices of her caretakers.

When she was able to stand and walk on stable legs, she was moved into a holding area for her 14-day recovery. She has never lived alone, and was not pleased to be separated from her brothers, even though she could hear them nearby. And she had even closer company: Wic Tiger, who lives next door to her recovery space, seemed quite chipper to have her as a neighbor. He may be elderly, but watching her sure seemed to put a bit more bounce in his step.

In the heat of summer, it’s not unusual for animals to get more lethargic or not be very interested in food. But for some of our residents, that becomes an issue because they’re less inclined to take their medications on schedule. For others, like Mazie Caracal, eating regularly is a must. 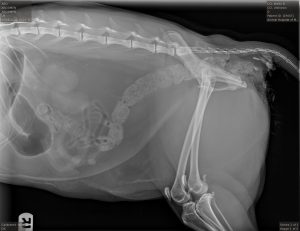 Mazie has a chronic digestive condition. Her lower colon does not work well, and she mostly passes a stool only when the next one is coming along. She’s on medication to help keep things moving, but she must eat regularly to stay on track. In the hot weather she was being a picky eater and stopped passing stool regularly. She also was scooting along the ground to try to help the situation, causing irritation. The keepers were treating that irritation with a prescribed cream, but it was collecting dirt. Time for a visit to Dr. Doug!

Mazie traveled to the Animal Hospital in a custom-made transport crate with a built-in function called a “squeeze.” A squeeze allows us to push one side wall over toward the other, holding the animal for a few seconds for an injection or a quick exam. It’s much less stressful for the animal than having people restraining her, and eliminates the risk of escape. Dr. Doug was able to immobilize Mazie and get radiographs, which showed she was accumulating some stool in her digestive tract. She got fluid therapy and an exam to ensure there was no blockage. She came home with a clean bill of health and an order to drink lots of water and take her medication. Dr. Doug is working with Jessica to ensure Mazie’s medication dose keeps her stool soft enough to pass easily. 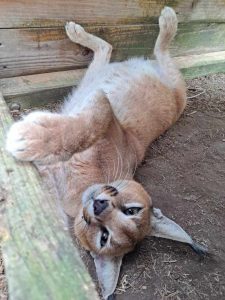 Mazie is back on track.

With cooler weather, Mazie has kindly decided she will eat her meals more regularly and will tolerate the keepers applying her cream or cleaning her off as needed. Much appreciated, Mazie.

A few months back, Jerry Binturong began squinting and rubbing one eye. After a short wait while he took medication to see if the issue was allergy- or insect-sting-related, Jerry traveled in a transport crate with a squeeze to see Dr. Doug. With the help of some medication to help Jerry relax, Dr. Doug was able to get a good look at his eye and discovered it was developing a cloudy spot on the cornea. Without specialized equipment, diagnosing and treating some eye conditions can be difficult, so while Dr. Doug prescribed follow-up medications to treat an infection, he referred us to the NCSU College of Veterinary Medicine (CVM). 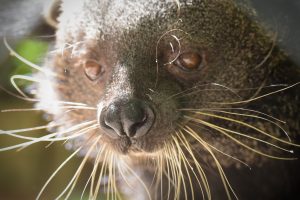 Visiting the NCSU CVM with a non-domestic animal is complicated. There must always be a zoological medicine specialist present to ensure everyone’s safety: patient, faculty, and students. Dr. Tara Harrison, the expert we rely on, had worked with Jerry previously, when a visit to address some minor age-related issues became an unexpected diagnosis of liver cancer. After surgery to remove the affected liver lobe, Jerry has been cancer-free for four years—and his tumor cells have been used to grow a cell line for research! Documentation of his anesthesia from that surgery and his follow-up visits helped ensure he got a personalized dose of anesthesia for his eye exam. An ophthalmology specialist examined Jerry’s eye and found he had a sequestrum, which Dr. Harrison described as a bit of matter that the body walls off from other tissue. A binturong’s body, like ours, seeks to expel irritants like that—forming ulcers or abscesses through which the item can get pushed out. Since the tiny fleck caught in Jerry’s cornea needed to be removed, the team did so right then. 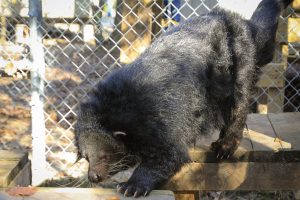 Jerry surveys his habitat before stretching out in the sunshine.

Jerry was sent home with medications that included antibiotics and eye drops. He moved into an indoor space for follow-up care and to keep him away from dirt and plants that could irritate his eye. The keepers had to coax and train Jerry to allow the drops, but they must have felt soothing, because he tolerated them well. The spot on his cornea diminished quickly, and his vision in the eye appears good.

Eventually, though, Jerry got annoyed by all the fuss. He wanted to go back outside. As soon as he finished his course of medications and got back into his own space, he immediately shuffled outside, climbed to a favorite spot, and stretched out in the sunshine. Exactly where you’re likely to see him—and, thanks to excellent care, have him see you in return—on your next visit.